Of flowers and frenzy

From tulipomania to today … On a crisp Autumn day in 1593, an elderly botanist named Carolus Clusius planted a handful of tulip bulbs in a small garden at the University of Leiden in the Netherlands. The act is considered by the Dutch as the birth of their famous flower business.

Commonly the tulip is thought to have originated in Turkey. Actually the plant probably first appeared farther east in the steppes of western and central Asia, primarily in Armenia, Persia and the Caucasus. From these lands, the tulip spread into areas along the Black Sea, throughout the entire Mediterranean area, even into China. As early as 1,000 A.D., the Turks were cultivating tulips.

Tulips were particularly popular in the courts of Suleiman the Magnificent, Sultan of the great Ottoman Empire from 1520 to 1566 during the ‘golden age of Ottoman power and grandeur’ when it achieved its greatest reach, stretching from Tripoli to the Persian Gulf to Hungary. Some called it the Ottoman’s ‘Tulip Age.’ It was there that Ogier Ghiselain de Busbecq, first saw them.

De Busbecq was ambassador of Austrian (Hapsburg) Emperor Ferdinand I to the Ottoman Empire. In the mid-1500s, he brought back a collection of tulip bulbs and seeds to Vienna, where he gave some to his friend Carolus Clusius, then Prefect of the Imperial Herb Garden there.

Originally a wild flower tamed by the Turks, cultivated tulips came to Holland by way of Carolus Clusius, director of the Royal Medicinal Garden in Vienna, who successfully raised the first European tulips during the 16th century. He fled to Holland for religious sanctuary, where he became director of the botanical garden at the University of Leiden. He took his tulip bulbs with him. Both thrived in the Dutch climate and an industry was born. By the time Clusius moved to take over the university gardens in Leiden in 1593 (a post he’d accepted in 1590), the old botanist had already been experimenting and cross breeding tulips for many years. His special interest was in medicinal applications.

When Holland was bullish on bulb

Fortunes were doubled in the blink of an eye. Poor men became rich, and rich men became filthy rich — without doing a day’s work. In the wildly speculative marketplace, even the threat of government crackdowns couldn’t halt the illegal trading of the hottest commodity in 17th century Holland – tulip bulbs.

In 1593, no Dutchman had ever seen a tulip. In the 400 years since, the Netherlands has become synonymous with this most beloved of spring flowers.

By the 17th century, horticultural experimenting created many new breeds of tulips. Clusius’ tulips caused a sensation. Their beauty and rarity caught the national fancy. In no time, they became ‘the rage’ as aristocrats flaunted the exotic flowers as symbols of power and prestige.

When the middle classes began to realize how much money the upper classes spent on tulip bulbs — and how much money they made selling them – they sensed a ‘fool-proof’ get-rich-quick opportunity. Soon all tiers of Dutch society were swept up in a tulip trading craze that peaked in the 1630s, selling ‘futures’ on crops not yet grown or harvested.

Bulbs were sold by weight, usually while they were still in the ground. All one had to do to become rich was to plant them and wait. The buying and selling of a product as invisible as un-sprouted flowers came to be called the ‘wind trade.’ as the speculative prices were being made up out of thin air.

Traders could earn as much as 60,000 florins (today approx. $44,000) in a month – not a bad commission even by 20th century standards. People were desperate to cash in on the bulb-trading frenzy! Small businesses were sold and family jewels were traded.

Local governments tried unsuccessfully to outlaw this commerce. But like any profit boom, trade was legislated by economics, not government. The bottom fell out of the market during 1637, when a gathering of bulb merchants could not get the usual inflated prices for their bulbs. Word quickly spread, and the market crashed.Thousands of Dutch businessmen, many among the country’s leading economic powerbrokers, were ruined in less than two months’ time – extremely rapid deployment of bad news for 1637! After the market crashed in 1637, bankrupting many, the era came to be known as ‘Tulipmania’ or ‘Tulipomania.’

When the dust of the financial frenzy had settled, the love of the Dutch for this special flower remained untarnished. And though prices – which at one point had risen to an incredible modern-day equivalent of $44,000 per handful – had plummeted, the practical Dutch saw there was profit yet to be found in these beautiful and special flowers.

The tulips that sparked Tulipomania were especially beautiful. Somewhat shorter than many of today’s hybrids, they often had large flower heads with fabulous mottled or ‘flamed’ colors in two-tone mixes of red, oxblood, yellow, purple and white. Today we call these ‘Rembrandt tulips,’ as they are featured in so many famous paintings of the Dutch Masters.

Once the Dutch gained more expertise, they found that the source of this lovely ‘broken’ coloring pattern was actually a virus, called the Mosaic virus. Eventually Dutch hybridizers (specialists who breed flowers with specific characteristics) managed to duplicate the exotic mosaic patterns in healthy plants. Today Rembrandt tulip ‘look-a-likes’ such as red-and-white ‘Union Jack’ and lavender-rose and white ‘Shirley’ are readily available to the home gardener.

Perhaps because of the scientific nature of the tulip’s introduction in Clusius’ university garden, the Dutch have always been meticulous about cataloguing and preserving important tulip species and their hybrids, called cultivars.

Over the past four centuries, the tireless efforts of Dutch hybridizers have led to new, healthier and more lovely tulips. Nearly a century ago, the industry adopted strict quality standards, forming organizations such as the Royal Dutch Bulb Growers Association to set and enforce these standards within the industry. Currently there are more than 3,500 tulip hybrids and species commercially propagated in the Netherlands. One hundred percent of all tulip bulbs sold by the Dutch are propagated and grown in Holland.

As part of this effort, the Dutch bulb sector maintains to this day a living museum of bulbs flowers in the town of Limmen. The museum, a patchwork-planted field called the Hortus Bulborum, helps preserve the gene pool for use by modern hybridizers, and stands as a monument to the reverence of the Dutch for tulips and other bulb flowers for which they are famous. At the museum, it is still possible to see one of Clusius’s original hybrids, the ‘Duc van Tol’, created in 1595. 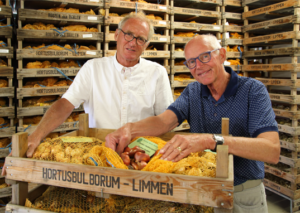